Our Unfinity Launch Party will be supported by the promo Water Gun Balloon Game. We will Hhand one out to each player who participates in our Launch Party event while supplies last. 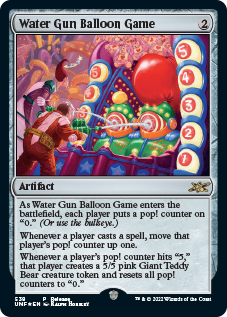 Posted by Gary Cambell-Smith at 08:17 No comments:

Email ThisBlogThis!Share to TwitterShare to FacebookShare to Pinterest
Labels: Magic the Gathering

What is Modern MTG?

What is Modern?
These are one-on-one games with 60 card minimums for the main deck (up to 15 card sideboard). Modern games should last average length for a game (about 20 minutes).
With the exception of basic lands (Plains, Island, Swamp, Mountain, Forest, and Wastes), your combined deck and sideboard may not contain more than four of any individual card, counted by its English card title equivalent. This format includes powerful cards and strategies from the last two decades of Magic.
What Sets Are Legal in Modern?
What cards are banned?
The following cards are banned:Ancient Den

Posted by Gary Cambell-Smith at 07:27 No comments: 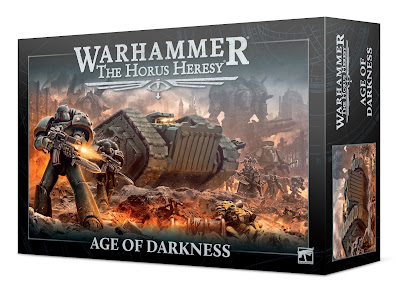 Set 10,000 years before the events of Warhammer 40,000, Warhammer: The Horus Heresy is set amidst the turmoil and strife of the Imperium of Mankind’s great galactic civil war, as the eponymous traitor and Warmaster, Horus Lupercal turned brother against brother as he betrayed his father, The Emperor of Mankind, to watch the galaxy burn.

The Age of Darkness boxed set contains everything that you need in order to dive right in with the new Horus Heresy game, including; 54 plastic Miniatures, a 336-page hardback rulebook, dice, templates, measuring sticks, transfers and reference sheets.
The 54 miniatures in the set are comprised of 44 all-new miniatures, as well as 10 existing miniatures. Together, these are: 1x Legion Praetor with Power Sword; 1x Legion Praetor with Power Axe; 40x MKVI Space Marine Legionaries in Power Armour; 1x Contemptor Dreadnought; 1x Spartan Assault Tank, and; 10x (pre-existing) Cataphractii Terminators. The boxed set also includes an introductory army list, allowing you to get playing games of The Horus Heresy straight away with no additional purchases necessary.
It should also be mentioned that nearly all the new models have rules allowing them to be used in games of Warhammer 40,000.

In Relation to Other Products: 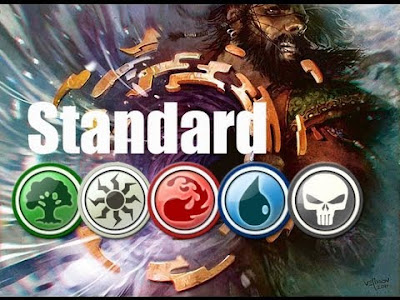 Recently we have had a few new MTG players and they have wanted to know what is Standard? So thought we should have a quick look at what sets are legal in this format.

Standard games are one-on-one with a 60 card minimum for the main deck (up to 15 card sideboard). Winner is determined either by best of one, or best of three games. These games should last standard length for a game (about 20 minutes on average, 50 minutes for best of three).

Standard is a dynamic format where you build decks and play using cards in your collection from recently released Magic sets. Evolving gameplay and fresh strategies make it one of the most fun and popular ways to play Magic.

On the world of Moroch, Imperial forces make desperate preparations to withstand the coming of heretic invaders. The frontier world is being braced as part of vast defensive strategies in an attempt to hold the Nachmund Gauntlet – a solitary route through the madness of the Great Rift. Yet the taint of Chaos is already upon Moroch, and it runs deep – traitors amongst the Imperial forces' ranks rise to strike from within. Few can be spared from the preparations for the looming war to hunt down these heretic cells, and now all that stands between the Militarum Traitoris warbands of Blooded and their total victory is an elite Phobos Strike Team of deadly Space Marines.

Kill Team: Moroch is the third full expansion box for Warhammer 40,000: Kill Team, the ultimate sci-fi skirmish game. It is released on Saturday 4th. It includes miniatures for two complete new kill teams, the covert Adeptus Astartes Phobos Strike Team, and the heretical traitor guardsmen of the Blooded – as well as transfers, a double-sided game board, a full set of terrain, and a new rule manual featuring missions, background material, and full rosters for both the two Kill Teams and Moroch itself. 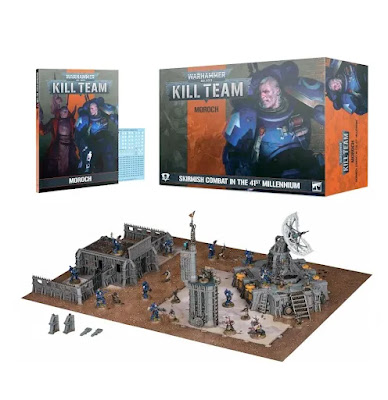 In this box you'll find:

1x 96 page Kill Team: Moroch Rules manual: take the fight to the corrupted world of Moroch, a key defensive point in the Nachmund Gauntlet, with background material for this stronghold world and the forces that clash over it. This manual also includes new rules, datacards, and background tables for the Phobo Strike Team and Blooded kill teams, as well as additional killzone rules and Shadow Operations missions set on this war-torn planet.

23x Citadel miniatures: Two full kill teams, including miniatures available for the first time in this box, each featuring a wide array of customisation and alternate assembly options. Extra components allow for deep personalisation of your kill team, and many models can be assembled as multiple different kinds of operative.

Phobos Strike Team:
- 10 Primaris Space Marines which can be built as Infiltrators or Incursors, with an extra sprue of upgrades and a mine marker – customise your kill team to complete your mission
- Extra components to build specialists like the Commsman, Helix Adept, Saboteur, Voxbreaker, Marksman, Minelayer, and Veteran
- Full transfer sheet with over 270 markings and emblems

Blooded Kill Team:
- 12 Blooded warriors to tear down the rotting edifice of the Imperium. 10 of these miniatures are available for the first time in this boxed set, and are accompanied by a Traitor Enforcer and a Traitor Ogryn, previously found in Blackstone Fortress: Traitor Command
- Includes components to build specialists like the Brimstone Grenadier, Butcher, Trench Sweeper, Flenser, Corpseman, Sharpshooter, and more

8x Fronteris terrain pieces: Recreate the rugged, mass-produced fortifications of Moroch on your tabletop. This assemblage of modular terrain pieces can be configured in any number of ways to create a varied killzone for your kill teams to sneak around and clash over, and is fully compatible with a wide range of other terrain kits. It includes:
- 1x Landing Pad
- 1x Vox-Antenna
- 1x Auspex Shrine
- 1x STC Hab-Bunker
- 1x Stockades with Doors
- 3x Stockades

1x Double-sided Fronteris game board: Battle over the war-torn outposts of Moroch on this double-sided 30" x 22" folding cardboard game board.

You'll need a copy of Warhammer 40,000: Kill Team Core Book to make full use of this supplement.
Posted by Gary Cambell-Smith at 09:42 No comments:

Available for any amount and redeemable on any products in our range. Vouchers are vaild for 3 years.

Posted by Gary Cambell-Smith at 06:40 No comments:

Email ThisBlogThis!Share to TwitterShare to FacebookShare to Pinterest
Labels: Vouchers 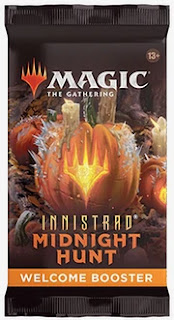 They are given away for free to new players to show off the coolest aspects of the game.

In addition, a MTG Arena code card in the Welcome Booster provides a code for the Wild Wizardry deck in MTG Arena.
Along with this pack we will give you a free spin down life counter.
Posted by Gary Cambell-Smith at 06:34 No comments: