It's time to go back to one of Magic players' favorite planes: Innistrad.

A spooky plane based on gothic horror—filled with Vampires, Werewolves, Zombies, Spirits, and, of course, Humans just trying to get by—loaded with fun and full of flavor.

But what is a Prerelease? 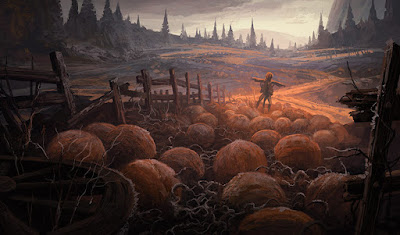 During Prerelease weekend, you have your first chance to get your hands on the new set.
The Prerelease of a set is great because the set is totally new, the footing is equal as everybody plays with the set for the very first time, and you just get to relax and have fun exploring the new cards. There's a lot of laughs, learning, and great games: it's a lot of fun for old and new players alike!

What does a Prerelease Pack for Innistrad: Midnight Hunt have in it?

You don't even have to brave the werewolf-laden forests of Kessig to get one of these beauties. And there is indeed a lot of good stuff inside—here's everything you'll get:

How do I build a deck?
You'll find six Draft Boosters, which is exactly what you need to get started building your sealed deck. First thing's first: crack them open! Then, you'll have a stack of cards.

It's time to build your deck, of course!

Sealed Deck is a little different from normal deck building. You get to build a deck using only the cards in front of you, plus as many basic lands as you'd like. Also, unlike a normal Constructed deck where the minimum deck size is 60, you only need to play 40 cards.

The first thing you're going to want to do is figure out a method to pick which colours you'll be playing. I recommend playing two colours and about 23 nonlands. You can sometimes "splash" for a third colour, but in general, you'll want to pick two to be your core.

Some things that may draw you into specific colours are:
A strong rare you're excited about
Plenty of "removal" cards that can deal with your opponent's creatures
A lot of playable cards in that colour
A good "mana curve" in that colour—meaning lots of creatures of different costs

Ideally, the colorus you pick will have all four, but if two or three of those are true, that's plenty good.

Now you have your colorus down. From there, how do you take everything you have and figure out which 22–23 cards to put in your deck?

Here's one process that may help!

First, lay your creatures out in mana-cost order. This helps you see what creatures you're going to potentially be able to cast at each part of the game. (Don't lay your noncreatures out at this point unless they're cards you are planning to play as soon as you have that much mana—for example, you will generally cast a Ritual Guardian on turn three, whereas Sungold Barrage isn't usually a turn-three play.)

A good "mana curve" of creatures is crucial to a successful sealed deck. You don't want to have a ton of cards at any single spot in the curve. It's important for you to have a good mix so you can play your cheap spells in the early game and your expensive spells in the late game. As a very general rule for Limited, I would look to play something like this:
1 mana: 0–2
2 mana: 4–6
3 mana: 3–5
4 mana: 2–4
5 mana 1–3
6+ mana: 0–2

That's far from hard and fast, but it's a good place to start. Cull your creatures down to these numbers by choosing your favorites.

Now that you have your core creature base figured out, it's time to add in spells! Pick your favorites among your colors to bring your deck to 22 or 23 nonlands, and then you're good to go from the spell side.

You can play more than 40 cards, but you really should stick to 40 if possible. Every card you play past 40 just means it's that much less likely you're going to draw that awesome rare you put in your deck!
The land ratio you're looking at should be about 17 or 18 lands to 23 or 22 nonlands. This isn't right 100% of the time, but most Limited decks end up looking like this, and, in general, it's what I would want to have.
Play a mix of cheap-to-cast and expensive-to-cast cards. If you have all cheap, small creatures, then a single big creature can shut you down. If you have all large, expensive creatures, you risk getting run over first. Stick to a mix that focuses on creatures with a mana value of two, three, four, and five. More games of Sealed Deck are won by casting a creature every turn starting on turn two or three than by any other way.
Evasion is important! Often, Sealed Deck games will get into stalls where both players have a lot of creatures and neither player can attack very well. Creatures with abilities like flying ensure that you can break through these creature stalls.
Unlike most Magic formats, Sealed tends to be a little slower. If your deck is on the slow side, choosing to draw (go second) rather than play (go first) can be reasonable to give you that extra card.

MAGIC FROM A DISTANCE

So, if you get product to bring home and aren't able to, or don't feel comfortable playing in a store, what should you do?

If you haven't tried SpellTable yet, it's really fantastic: with just a few clicks, you can set up your phone or computer with webcam to play Magic with someone across town—or across the world. Complete with life-total tracking and card lookup, it's really easy to set up: just log in with your Wizards account, and you're good to go.
Posted by Gary Cambell-Smith at 10:21

Email ThisBlogThis!Share to TwitterShare to FacebookShare to Pinterest
Labels: Magic the Gathering, Prerelease