What is the city's blessing? How do you get it? Let's have a look at a couple of new cards. 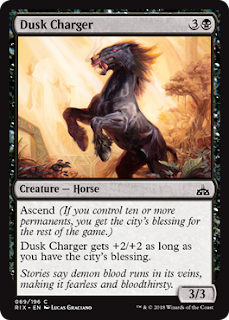 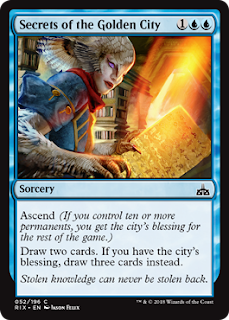 If ascend is on a permanent, it constantly checks to see whether you control ten or more permanents.

The moment you do, you get the city's blessing. This doesn't use the stack and can't be responded to. It just happens. But the permanent with ascend has to be under your control to check. If you control ten permanents, then go back to eight, and then you cast Dusk Charger as your ninth permanent, you won't get the city's blessing just yet. Ascend always looks at the current game state, not the past.

Ascend also appears on instants and sorceries, such as Secrets of the Golden City.

This means Secrets of the Golden City can give you the city's blessing before determining whether you'll draw two or three cards.

When checking if you control ten or more permanents, count every permanent you control, including lands and tokens. Don't forget Auras and Equipment, even if they are somehow attached to permanents you don't control. Don't count counters, though, as they aren't permanents.

Multiple players can all have the city's blessing at the same time. With all the warring factions on Ixalan, the Immortal Sun hops around like a hot potato, but possessing it even briefly leaves you forever changed. Gaining the city's blessing doesn't impact any other player's current blessing status.

Although the city's blessing isn't a permanent, token, or emblem, there is a a printed card to use as a reminder.
Posted by Gary Cambell-Smith at 08:09

Email ThisBlogThis!Share to TwitterShare to FacebookShare to Pinterest
Labels: Magic the Gathering, Mechanics, Rivals of Ixalan