There will be four Friday's this month and we will be back to normal Standard/Modern rotation. Starting with Modern. Due to the month also being the launch of the new set the 29th will be an additional Standard event, This will mean that there will be 3 Standard and 2 Modern.

The promo card this month is 'Fatal Push'. THIS IS THE LAST OF THIS TYPE OF PROMO CARD as from October we will be changing to foil tokens.

The rotation of events this month will be ...

While it hasn't taken off in Standard, Renegade Rallier actually has a strong spot in the Modern metagame as fetch lands enable the powerful ability basically at will. The updated art from David Palumbo is also really nice... 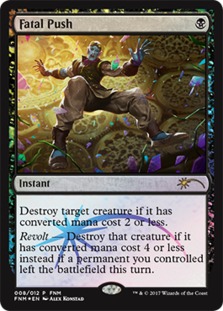 In addition to the main FNM event I will be continuing the idea of a smaller FNM event which will start at 5pm. This will be free to enter with FNM promo cards for first and second place (it will still be sanctioned and count toward KD points). This event will be the best of one game and rounds will last just 30 mins.

The proposed event formats are as follows...


For the younger players there will also be casual FNM from 4pm which is not a tournament but every play gets an FNM promo (sometimes older ones) just for playing!
Posted by Gary Cambell-Smith at 07:00