With the prerelease for the new set of MTG only a short while away it is time to have a look at some of the new mechanics.

The God-Pharaoh's legions are destructive, vicious, and just generally the sorts of folks you wouldn't invite to a party. But perhaps you're just going to the wrong parties. In any case, if a minion of Bolas is attacking you, it's a sure bet something bad is going to happen. The new ability afflict ensures just that. 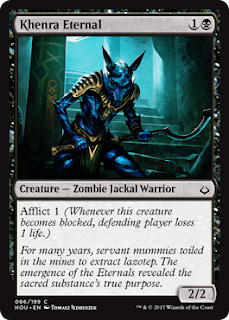 Khenra Eternal attacking puts your opponent in an uncomfortable position. If they don't block it, it gets through to deal combat damage. If they do block it, they're losing 1 life anyway. Different creatures with afflict have different afflict numbers and cause the loss of different amounts of life. It doesn't matter how many creatures block a creature with afflict; afflict triggers only once per combat at most.

Posted by Gary Cambell-Smith at 02:20